As 2014 comes to a close, so does the commemoration of the 50th Anniversary of the Wilderness Act. The anniversary meant festivals and other events celebrating the legislation that protects the wild lands we cherish. It also meant getting out and enjoying wilderness lands while drawing attention to the designation that ensures their permanent protection.

We founded Montana Trail Crew as an "educational and conservation-based nonprofit for mountain and trail runners devoted to discovering the perfect single track trail, maintaining access to open space, preserving wild lands, and cultivating a running community under the Big Sky." We post stories and race reports about Montana destinations and people, we organize trail work days, and we look for ways to highlight some of the experiences that make trail running in our state so special. We also run the wilderness.

In honor of the 50th Anniversary of the Wilderness Act, I set out to experience Montana's wilderness areas on the run. After covering hundreds of wilderness miles and documenting my journey along the way, I hoped to spread the message about the value of wilderness to the trail running community. In October, I joined fellow trail runner, historian, and MTC founder Jed Rogers at the National Wilderness Conference in Albuquerque where we presented a talk on our wilderness running experiences. We also produced the non-commercial short film Running Wilderness--now available for public viewing--as a way to offer a glimpse into the wilderness running experience. The film first screened at the Mountain Running Film Festival in Missoula and now we're happy to share it with a wider audience.

We hope the film draws attention to wilderness preservation and the Montana trail running experience. With any luck it might inspire your own adventures in the new year. 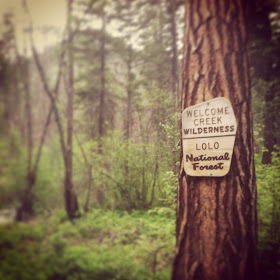