What more could a Montana trail runner ask for than having the 2014 Sky Running World Series Final in our own back  yard?  I’d bet that co-race directors “The Montana Mike’s” couldn’t have imagined their creation would achieve such prestige in just it’s second year of existence.  For the first time ever, Montanan’s would not have to travel to Colorado, Utah, California, or Europe to race against the world’s best.  An easy drive along the Gallatin River would lead us to Big Sky Resort, host of the 2014 The Rut 50k.


Heading into The Rut I was looking to have a great performance after a lackluster outing at Speedgoat 50k in July.  Amongst this stacked field, I knew equaling my 2013 Rut 4th place finish was not a likely scenario.  I figured a top 10 finish would be amazing and I’d be happy with finishing inside the top 20.  Through some self-imposed pressure of being a Hoka sponsored athlete, I felt the need to have a solid performance in order to validate my sponsorship and position myself near the top tier of the ultra running community.
At 5:58am I was at the start line of the 2014 Rut 50k standing next to Kilian Jornet, Sage Canaday, Rickey Gates and other elite mountain ultra runners.  As I took my position at the front of the start line, I was overcome by a sense of quiet confidence, a feeling like I belonged.  As the clock struck 6:00am, Mike Wolfe sounded the elk bugle and we surged off into the darkness.  The pace was brisk as the field spread out over the 1/3 mile of dirt road leading to the first single track.  I fell into line right behind Matt Shryock somewhere around 10th place and would maintain this position sandwiched between a group of eight guys for the entire first climb.
My strategy for this race was to go out hard but keep things comfortable.  There were two factors driving this race strategy.  The first was due to the relative flat to downhill course profile for the first 8 miles of the race.  I knew that the more runnable terrain would suit my strength.  The second factor was the need for me to be in the mix early so that I was forced to be in a competitive mindset from the start.  If I went out conservative and tried to play catch up, there was a good chance I wouldn’t be able to mentally shift gears into a competitive mode because I’d be too far back from the action.  With the talent and experience in this field, it wasn’t likely that many guys were going to blow up and hobble into the finish. 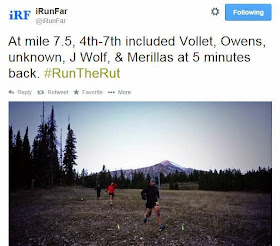 Heading into the Madison Aid station at mile 7.5 I was running with a group of guys including Jimmy Grant, Tom Owens, Greg Vollet, and Manuel Merillas.  Most of us ran right past the aid station without stopping.  As the darkness was fading, I threw my headlamp to a bystander and continued on the chase.  At the time, I had no idea of our place amongst the field of runners. 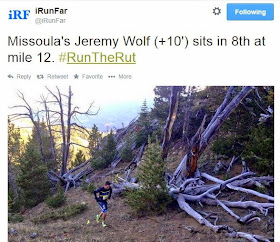 The next 6 miles are runnable dirt road and single track up to the base of the Headwaters climb at mile 13.5.  In this section I started to fall off the back of this group of runners, although always close enough to see them at the next switchback above.  Below me, I could see Paul Hamilton approaching.  As Paul passed me I said hello and we gave each other a fist bump as he continued on his way.  I was perfectly content with Paul passing me as it gave me confidence that I was well positioned amongst the elite field a third of the way through.  Just before the Headwaters climb I caught up to Jimmy Grant.  It was good to see a local running buddy who I’ve shared many mountain running adventures with leading up to The Rut.  As we reached the base of the headwaters climb the race entered into a totally new dynamic.

Out came the hiking poles as I used them to assist me in pushing up the steep talus field.  About a quarter of the way up the climb I looked down to see a swarm of guys right behind me.  In a matter of two minutes I was passed by Daniel Kraft, Alex Nichols, Catlow Shipek, and Rickey Gates.  Most of them were using hands and feet to climb up the steep slope.  Upon reaching the ridge, I could hear the sound of rocks sliding down the mountain.  As I approached the steep chute that the course descended down, I looked up to see my friend Joel Wolpert perched above with his camera ready to capture the carnage coming down the chute.

Without much time to access the situation because I heard runners right behind me, I jumped into the gully completely ignoring the hand rope.  At first I was running, then skiing on lose rock and dirt, and then sliding down on my ass using my folded up poles as a break.  About 20 yards later I exited the chute to the sounds of more rocks being kicked down from the runner behind me.  A few strides later I stopped to compose myself, stow my poles, and let Nick Elson and Fulvio Dapit pass me.  On the equally steep descent off the headwaters ridge I passed Alex Nichols and Rickey Gates who were gingerly working their way down.  I managed to take one more steep and loose section on my butt before making it down to the runnable dirt road.
The course became familiar again as it matched up with the 2013 route up to the Tram Dock Aid Station at mile 18.  As I hiked up the single track climb, I was passed by Rickey and then Alex.  However, shortly thereafter Alex came to a walk and stepped off the course.  I assume this is where he dropped and his race ended.

The half mile dirt road section up to the tram dock is the only out and back section and proved useful in helping me to gauge where I was in the field of runners.  The first guy I saw come down was Tom Owens followed by about 9 other runners as I made my way to the dock.  I still didn’t know how many runners where ahead of Tom, so I wasn’t certain of my overall place, but arriving at the aid station a few minutes behind Rickey left me feeling that I was in the mix.  Heading back down from the tram dock I was pleasantly surprised to see that there was no one immediately behind me.  It was a good 3 minutes or so until I saw the likes of Jeff Rome, Adam Campbell, Kiefer Hahn, Luke Nelson, and Jimmy Grant heading up.
The climb up bone crusher ridge to the top of lone peak seemed longer and harder than last year.  Up ahead I could see a small white dot known as Rickey Gates pull away, apparently unfazed from his Vertical Kilometer race here the day before.  It was nice to pass an acoustical band playing along the ridge to take my mind off the never ending climb.  About a quarter mile from the summit, Adam Campbell passed me.  I was impressed by his climbing skills as he was way behind me at the tram dock out and back.  Finally, I summited Lone Peak to a crowd of cheering on lookers.  Relieved that the long climb was finally over, I asked them if this was heaven.
At mile 20 and at 11,166ft, it’s basically all downhill from here.  In no hurry, I made my way down the ridge making calculated steps amongst the dinner plate sized talus rocks.  The further down the mountain, the smaller and looser the rocks became.  By half way down, I could feel a dozen small rocks inside each shoe grinding against my feet with each step.  Add to that, large blisters where starting to form on each heel from all the down hill braking and this decent couldn’t be over soon enough.  Finally at the bottom I took a minute to empty each shoe of the rubble they had collected on the way down.
The last 8 miles were relatively uneventful.  I did not hear or see another runner the rest of the way.  The only thing of note that happened was at a sharp turn at mile 25 where a friend was stationed and told me that I was in 13th place (actually 14th).  Upon taking my eyes off the trail to say hi, I immediately tripped and found myself diving face first onto the trail.  Slightly embarrassed, I immediately checked to make sure I hadn’t snapped my poles in half, got up, had a chuckle, and continued on my way.  My mood and energy level was bolstered by knowing that I had a solid place in the field and I made sure not to lose a spot on my way to the finish.
The finish line atmosphere was the best of any race I have ever run.  Hundreds of people lined the finish line chute and cheered me on as Anders Brooker said every nice thing he could about me over the loud speaker, so like 3 things.  As I approached the line I spotted my wife Tiffany and 3 year old daughter Autumn.  I ran over to them and grabbed Autumn so she could finish with me.  With a fist pump in one hand and my daughter in the other, I crossed the finish line to a riotous applause.  My feelings were a blend of personal satisfaction from a strong finish amongst a world class field and home town boy done good.  I’ll never forget sharing this moment at the finish line with my family in what’s the closest I’ll ever come to a paparazzi like environment.

What an amazing event.  The fact that Kilian Jornet and the best mountain ultra runners in the world came to Montana to race still blows my mind.  In a state that doesn’t host world championship events in any sport, it is truly amazing what The Rut has become in only it’s second year.  My hat is off to Mike Foote, Mike Wolfe, and Anders Brooker for dreaming big and allowing us Montana boys and gals to race against the best in the world on our home turf!
Result:
14th place – 6:15:16
15th place - Final 2014 Sky Runner World Series Ultra Ranking

Gear:
Shoes: Hoka One One Rapa Nui 2.  Awesome to have so much cushioning underneath to tame the steep rocky descents.
Poles: Black Diamond Z-poles

Nutrition:
Omnibars for post race recovery and all around whole food nutrition.
Hammer Gels and Endurolytes.  Consumed one gel pack every 30-45 minutes.